We offer World's Finest Waterless Cookware by Maxam. Waterless cookware is the healthy way to cook •World's Finest Waterless Cookware Set is made by Maxam which has more than 50 years history of cookware production(located in Texas). You are buying a lifetime long item, why not to choose a prime brand? Let's see what benefit you'll get if having a set of World's Finest 7 Ply Steam Control 17pc Surgical Stainless Steel Waterless cookware Set. Keep more nutrient. It reduces the loss of water-solubility vitamins if you don't add water or only add very little water. For some vitamins such as B12 can be most kept under this non-light,low-pressure cooking method. Reduce grease and fat intake,oil is used just as an ingredient. You even don't need to use cooking oil if you don't wan't to. Saving energy as it only allows you cook in meduim and low heat,never use high heat. Meanwhile you can stack cook.(two or three cook pieces stack up and cook food at the same time) Saves time and effort.Sealed cook reduces cooking time Stack cook allows you cook different food in dfferent cook tools at the same time. Whistle valve control eliminates the trouble for you to check and monitor the food from now and then. Your kitchen will keep cool when cooking as it cooks in low to medium heat (never high heat.) article credited to: http://www.healthy-chinese-recipe.com/worldsfinest-waterless-cookware.html

We now offer Waterless cookwae in our store at a big discount rate. Why pay over $2000.00 for a perfect set of cookware when you can get it at discount in 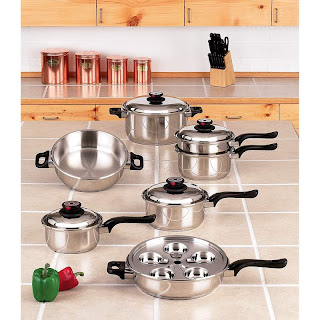 The older I get, the more I discover that you're never to old to learn! We've opened a new store. It's been fun getting it set up with a lot of new items. It's still pretty much in the process of getting all ready, but should be all set up wwithin the next couple of days! Stop By and see us sometime! As in everything we do we are using all of our rescources to take care of our feral cat colony. Right now we have 19 cats and kittens waiting for dinner...so I'm closing for now to go feed and play. Have a great day! See you soon with more info!
Posted by Sharlyns Country at 8:03 PM No comments:

I love crafting and sometimes make my own things to sell on eCrater or eBay. One of my favorite things in a clock made from old damaged 78 LP records.

This is a real working battery operated clock 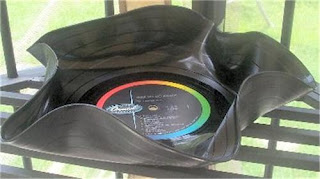 This clock can either hang on the wall or sit on a table. It is battery operated and battery is included. Vintage LP 78 Record Made Into Decorative Vinyl Clock For Home Decor

This is an original 78 LP Record. The record was no longer playable and has been reconditioned into a decorative vinyl clock.

A great decorative piece that saves a piece of music history and turns it into something useful and pretty!

A unique decor for your home and a great conversation starter. Labels show on both the inside and the bottom of the bowl

The LP's that I use to do this are no longer playable from age, or misuse and this is a way to save the enviroment by turning them into something useful The vinyl records are not laminated...they are theoriginal records, so they should not be allowed to get too wet or the label may be damaged If you have a certain artist in mind, please let me know.

My Life With Rescued Cats

We started a cat and kitten rescue by accident. Before our rescue was only dogs and puppies. But something happened in the fall of 2010 that changed our direction and our mission.
I work as a desk clerk in a local motel and behind the motel is the woods. In these woods lives a feral cat colony.

Last Sept. there was a little orange kitten about 8 weeks old that kept coming to the hotel door but if we tried to catch him, he would run away and one morning he came and his mouth was bleeding and he was crying, so we were finally able to catch him. I took him home and took him to the vet where he had surgery on his mouth. We named him Blaze.

Fast Forward to June, 2011. My son is a truck driver and when he comes home he parks his rig in the motel truck parking.

When it was time for him to leave, we took him to his truck. It was fully loaded and covered with big tarps and tiedowns. He decided he better check his load before taking off. He lifted part of the tarp and there were two baby kittens laying there.

They couldn’t have been more than 2 weeks old. We decided to wait and see if the mother would come back for them. She didn’t. Maybe she just had too many to care for. And these 2 obviously were the runts. They were very little. And we couldn’t just leave them there for long cause it was over 100 degrees out.

So I took them home. Made a bed for them, got kitten formula and bottles and bottle fed them. We knew they had to have come from the same feral colony that Blaze came from.

From the moment I brought them home, Blaze would jump into the bed, clean them, and cuddle them. We named them Bandit and Sparkle.

I would tell friends about this and they thought I was crazy. Everyone kept telling me that a full grown male cat would not take care of babies. Well…guess what! He did. As they grew, he would show them how to use the litter box, and how to eat real food.

He still sleeps most of the time with them and cleans them. And they really love him.

I personally feel that Blaze knew that somehow they are related. Coming from the same colony, maybe they have the same parent. I just know that Bandit and Sparkle act like Blaze is their big brother.

I think the three of them know it!!

Now it's time to tell of the fall of 2011. A little cat wandered into our yard. She was so precious, but she wouldn't let anyone near her except Blaze. Blaze would go outside and stay with her and he showed her a place under the house where she could live. She built a nest under there and within 2 weeks she had 5 kittens. We let the kittens stay with her and grow up.
When she was done nursing and the kittens were about 10 weeks old, we trapped her and took her to get her spayed. We named her Precious Baby.
Now Blaze is taking care of Sparkle and, Bandit in the house and Pecious Baby and her kittens under the house.

In this pic the kittens are about 14 weeks old 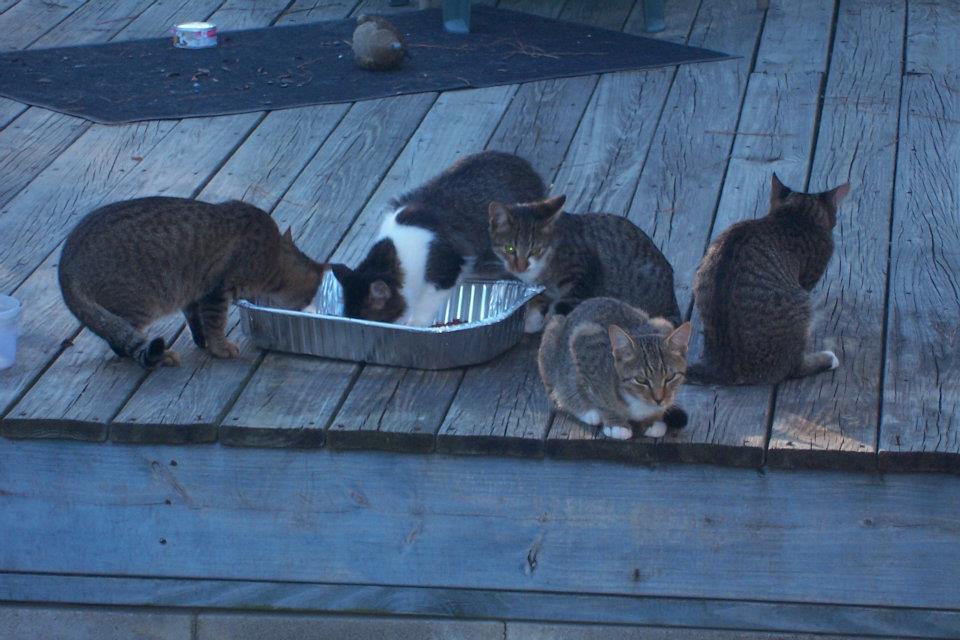 More stories and pics next month on building a shelter and taking some of the kittens inside for solicization.
See Our Store On eCrater. Everything we sell goes to our cat rescue.
Posted by Sharlyns Country at 9:40 AM No comments:

Some Of Our Rescued Kitties 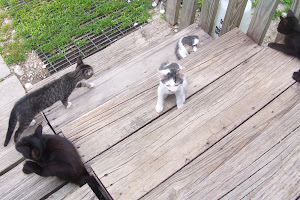